Researchers have developed a new approach to estimate the true size of very large earthquakes.

At present, scientists use seismic waves from a rupture to work out the scale of the event.

But a new analysis of the Tohoku earthquake in Japan in 2011 shows that changes in gravity can give more rapid information.

This method could have accurately estimated that magnitude 9 tremor in minutes, not the hours actually taken.

As Japan's largest recorded earthquake, the Tohoku event is probably best remembered for the huge tsunami it unleashed.

As well as killing around 12,000 people it triggered the meltdown of three nuclear reactors at the Fukushima Daiichi power plant.

Experts believe that the quake was caused by the rupture of a stretch of the subduction zone associated with the Japan Trench, which separates the Eurasian Plate from the downward-sliding Pacific Plate.

Initial estimates of magnitude by Japan's meteorological agency indicated it was a 7.9 tremor. Three hours later, this was corrected to 8.8. Eventually the Tohoku quake was upgraded to 9.1 magnitude.

These estimates are based on seismic waves generated by the earthquake which travel through the Earth and are recorded on seismometers all over the world.

Scientists look for what are termed P-waves as the fastest way to deduce what is happening in an event. These travel at around 7-8km per second.

However, French researchers have been looking at the possibility of using small shifts in gravity to estimate scale.

Large tremors can cause perturbations in the Earth's gravitational field – and as these signals travel at the speed of light, they open up the possibility of much more rapid detection of quake magnitude.

Up to now, gravitational signals have been difficult to detect above the seismic noise, but the French research team developed their model to analyse the Tohoku event using data recorded with broadband seismometers located some 1,000 to 2,000km from the quake.

"As soon as you have the location and origin time of the earthquake, you know when the seismic waves will arrive at good quality stations inland," said lead author Dr Martin Vallée, from the Paris Institute of Earth Physics.

"And if you look to see a gravity signal before the arrival time of the seismic waves, if you can see this, it really means you have a large event. If you cannot see it you will be in a magnitude 8.5 or below."

According to the authors, this method of analysis would have reliably detected that the Tohoku quake was greater than magnitude 9 within three minutes of the origin time.

This could have had major implications especially for the tsunami that followed it.

"Knowing that a quake is very large a few minutes after is not very useful for the areas that are directly affected because the seismic waves will already have affected the area," said Dr Vallée.

"But it is for the tsunamis which often arrive half an hour after an earthquake, they are much slower than the seismic waves, and here you have some time to react. It is very useful."

At present, the research team say that the ideal places to test the method are in locations that have had an earthquake greater than magnitude 9 in recent centuries, such as the Cascadia region of the US and Canada.

Looking ahead, the scientists believe that with refinement, their method of analysing gravity signals could allow more rapid detection of the size of smaller events.

"It will be really important if in the future we have instruments that can measure the signal and are more sensitive," said Dr Vallée.

"We will be able to apply the same analysis to smaller earthquakes, and when I say smaller I mean magnitude 7 or 8 which in fact are very large and can destroy a lot."

The study has been published in the journal, Science.

It's not possible to predict earthquakes but it is possible to issue alerts once a major event is under way.

And for those not living directly above the point of rupture, but some distance away, such warnings can give people vital seconds to prepare.

These systems – they have them in places like Japan and Mexico – work on the basis of detecting the different arrival times of seismic waves.

So-called P-waves are less destructive vibrations that run ahead of the far stronger and more damaging S-waves. But neither move as swiftly as the changes that become apparent in the gravity field once a quake has moved a great mass of rock inside the Earth.

If you could practically harness this signal in an early warning system then it could provide just a few seconds more grace for the surgeon to lift their scalpel away from a patient's organ or for the driver of a packed commuter train to slow down.

However the gravity signal is very subtle and it will be challenging to make use of it in all but the very largest events. On average there is only about one "great quake" of magnitude 8 or higher a year. But there is hope the technologies can be improved.

This new research came out of discussions surrounding the detection of gravitational waves from black hole mergers in space.

That technique had its doubters for a long while but eventually proved its worth. Even if a gravity signal cannot be woven into an early warning system, just knowing the true scale of a quake much faster will be important information for first responders. 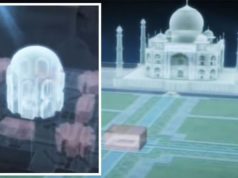 Saboteur May Flakes on Israel Support, Opens Up ANOTHER Front With...

Tom Kerridge unveils menu with British Airways which will include variety...

Breath test for cancer being trialled in UK