As NYC moves to equip its police force with bodycams by 2020, its main police union is suing to block the release of such footage without a court order. Civil rights groups say the public has a right to view the videos.

The Patrolmen’s Benevolent Association (PBA), which represents two-thirds of NYC’s 36,000 officers, has filed a lawsuit at the State Supreme Court this week in a bid to prevent the release of bodycam footage to the public.

Patrick J. Lynch, PBA president, criticized the practice of releasing bodycam footage to the public, saying it represents not only an invasion of privacy, but it could put police at unnecessary risk.

“This footage has serious implications not only for the safety and due process rights of police officers, but for the privacy and rights of members of the public, as well,” Lynch said, in a statement that accompanied the lawsuit.

Lawyers representing the PBA argue that bodycam videos are employee records protected from public disclosure by Section 50-a of the state Civil Rights law, which also serves to shield police officers’ performance evaluations and disciplinary records from public scrutiny.

The office of New York City Mayor Bill DeBlasio, who made police reform the centrepiece of his campaign, expressed disagreement with the police union's interpretation of the statute, saying that transparency is key to maintaining public trust.

“The mayor and the police commissioner have spoken to the need for increasing transparency into the way our city is policed,” Austin Finan, a spokesman for the mayor said, as quoted by the New York Times.

“The release of body camera footage, when possible, is an important extension of that commitment.”

Richard Aborn, president of the Citizens Crime Commission of New York City, a criminal justice policy watchdog, supported the right of the public to view bodycam footage in high-profile cases.

“What is crystal clear is the right of the public to see these videos and hear reports from the government about what happened in these shootings is paramount, and the courts have got to find a way to expeditiously resolve any dispute and allow the dissemination of this information,” he told NYT. “So to me, this is about speed.” 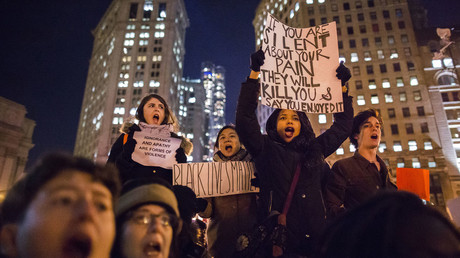 The move on the part of the PBA comes as civil rights groups and ordinary citizens are demanding more transparency and accountability, following a series of high-profile incidents that appear to show police using excessive force in the line of duty. On some occasions, encounters between police and civilians have resulted in death.

The tragic death of Eric Garner, a father of six, stands out as perhaps the most compelling argument in favor of the public's right to view bodycam footage.

In July 2014, a group of New York City police officers attempted to arrest the 43-year-old for selling cigarettes on the street. One of the officers put the Staten Island resident in a chokehold – a move that is banned by the police – that caused Garner to lose consciousness and, reportedly, to go into cardiac arrest.

In a witness video of the incident, one of the officers can be seen pressing Garner’s head against the pavement, with Garner yelling multiple times, “I can’t breathe! I can’t breathe!”

Garner was pronounced dead later at a nearby hospital.

Despite what appears to have been excessive use of force, a New York City grand jury acquitted the arresting officer, Daniel Pantaleo, a decision that led to protests in Manhattan and to fierce condemnation over social media.

Meningitis B family ‘disgusted’ over lack of action