Russian opposition leader had called for rallies on ‘rigged elections’

Navalny wrote that he was released until a court hearing, but did not provide details on when the hearing would be held. He also thanked demonstrators who had gathered near the detention center where he was being held. Navalny, a longtime critic of President Vladimir Putin, was arrested earlier Sunday during nationwide rallies protesting what the opposition leader calls rigged presidential elections set to take place on March 18. "I've been detained. This doesn't matter. Come to Tverskaya (Street). You are not going there for me, it's for you and your future," Navalny tweeted after his arrest.Within minutes of arriving at Pushkinskaya Square, where hundreds of protesters had gathered, Navalny was wrestled into a patrol van by police, in dramatic footage posted on Youtube.Moscow Police said Navalny was taken to a police station for arraignment on charges of illegally organizing a protest. If found guilty, he faces 30 days in detention and a fine. 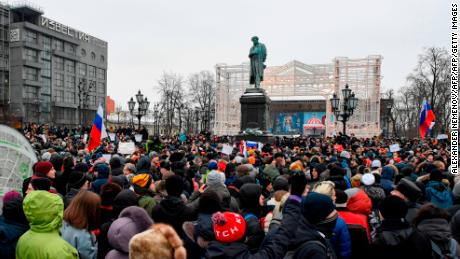 Coordinating protests in the largest country in the world by land mass is no small task, and the Russian Interior Ministry said events coordinated with local authorities were held in 46 places.Demonstrations have ranged from gatherings of a few dozen in remote areas to about a thousand people in central Moscow–which the Interior Ministry described as an "uncoordinated mass demonstration." Protesters also turned out in arctic areas of the country, where the temperature during winter is around -40 degrees, said CNN's Fred Pleitgen in Moscow.Elsewhere, there were 600 demonstrators in Russia's third-most populous city, Novosibirsk, and 550 protesters in Nizhny Novgorod in western Russia, the ministry said. 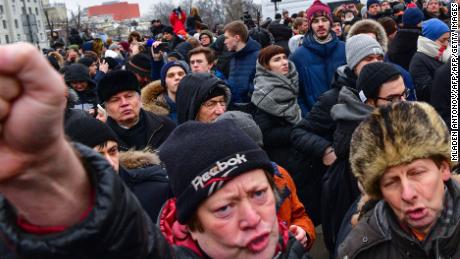 "I am proud of all those who joined us today in any capacity: from Magadan to Sochi. From the FBK office to the headquarters in Kemerovo. From Krasnodar to Yakutsk, where the meeting took place at -40. These are real citizens," Navalny said in a Facebook post."Be real citizens. Go out to the demo in your city."

Earlier Navalny said police forced their way into his Moscow office hours before the protests were due to take place. 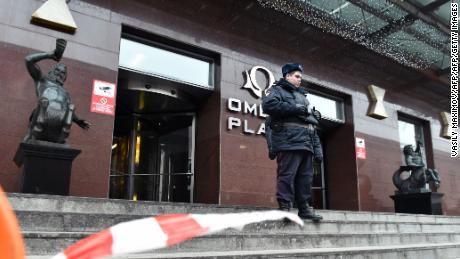 He said police sawed through the door of the office's studio during a YouTube broadcast Sunday morning."In order to take down our broadcast, the police cut out the door to the Anti-Corruption Foundation (FBK) office, and then began to saw the door to the studio right in the middle of broadcast," he said in a Facebook post."Do you know the formal reason? Dmitry Nizovtsev, the host, was accused of planting a bomb (without actually going off air, we must assume), and it was necessary to cut the doors ASAP in order to find this bomb."And then they detained him. Watch it, it's a good example of what the Russian police has become."CNN contacted the Moscow police, but officials there said they "have no information regarding the raids." 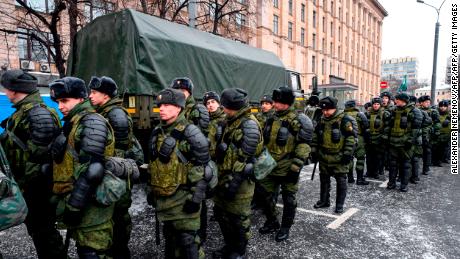 Eight staff members from Navalny's Moscow offices were detained in the raid and were among 185 people arrested across the country, according to independent monitoring group OVD-Info. They included the head of Navalny's Moscow headquarters, Nikolay Lyaskin, who was grabbed by police on his way out of the office, according to Navalny press secretary Kira Yarmysh.During the raid, police also seized computers and cameras from the office, tweeted the director of Navalny's Anti-Corruption Foundation, Roman Rubanov. 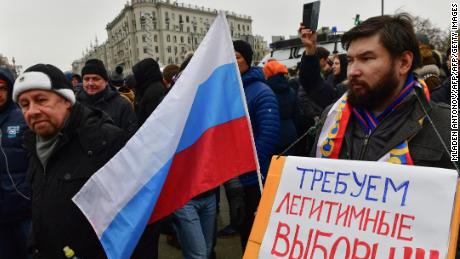 Putin controls and dominates Russian State TV, where there has so far been no mention of the demonstrations.Instead, Navalny and his supporters have turned to YouTube to get their message out, with over 50,000 people watching his live feed as of Sunday morning.

Who is Alexei Navalny?

Navalny, Russia's best-known opposition leader, was barred from running in the upcoming elections after a 2017 criminal conviction for embezzlement. 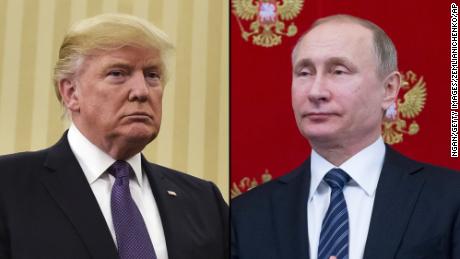 Critics say the case against the 41-year-old was politically motivated.In an exclusive interview with CNN at his Moscow headquarters last week, Navalny accused the Putin administration of being "built on corruption" and warned of growing impatience for political change. "Putin has been in power for 18 years now," he said. "People are not ready to wait another six years, then another six, then another."The Kremlin has rejected allegations of widespread, high-level corruption and has condemned Navalny as a dangerous influence whose calls for protests could plunge Russia into chaos.

Russian opposition leader had called for rallies on 'rigged elections'