In the clip, you see one of the blokes approaching the small gap in-between rocks, with no clear ending in sight.

He jumps in and you can’t help but think of the worst as he completely disappears.

But then his mate follows suit and takes a leap of faith down the tunnel. 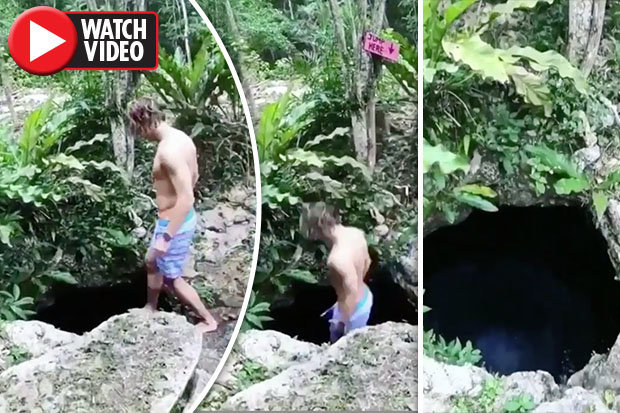 FEARLESS: The bloke jumped into a bottomless hole

After a short jump, the bloke hits the water at the bottom and makes his way towards a beam of light.

He is then presented with a ladder and what appears to be a way out of the crater.

The footage is believed to have been filmed at Cenote Calavera, in Tulum, Mexico.

It was shared to Reddit yesterday and has already received a huge amount of attention.

Over 38,000 people have up-voted the post since and posted a number of comments.

One read: "Looks fun, but as a general rule I don't follow sketchy handmade signs that say 'jump here'."

And another added: "This is my idea of a nightmare.”

Clips like these seem to be surfacing more recently.

Earlier this week we saw a group of friends jump into a small hole in the ground.

And previous to that, a bloke was filmed diving head first into an underground cave.