It then hurtles towards the historic waterfront mansion of Hekimbasi Salih Efendi.

Staff and diners inside the building are seen fleeing in panic.

The mansion – which has stood since the 18th century – had its roof and upper floors collapse after the accident but there were no reported casualties.

SCARY: A tanker smashed into a waterfront mansion in a terrifying video

Traffic on the strait was suspended in both directions after the crash, blocking the maritime travel route that carries more than 3% of the global oil supply.

According to state officials, the massive tanker lost control after its steering equipment became locked.

The Malta-flagged Vitaspirit tanker – carrying 62 tons of dough from Russia to Saudi Arabia – was pulled back from the crash site. 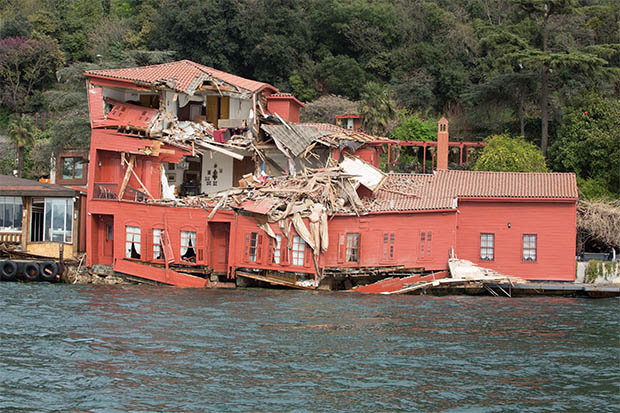 The Bosphorus is one of the busiest straits of water in the world, with more than 42,000 vessels using it in 2017 alone.

It comes just days after a ferry carrying more than 150 passengers crashed into rocks off the coast of South Korea.

Coastguards managed to eventually rescue 163 people after a huge operation.