MUST SEA: These results may put you off your summer holiday

Before booking a holiday, its always important to check that the location you are visiting is safe.

While some areas are associated with terror, others are prone to gun crime and other serious offences.

You may associate war torn countries with danger, but its actually a popular British tourist spot that comes out on top.

Spain is the country where the most UK citizens passed away between 2015 and 2016, according to Indy100.

A whopping 697 deaths were recorded, which is almost twice as much as the second deadliest country.

This warning is backed up by previous research, which showed that the European country could be dangerous for tourists.

It was found to be the destination where you were most likely to fall ill and have your passport or money stolen.

While these statistics may seem surprising, you have to remember that Spain is frequented by hundreds of thousands of Brits every year.

This fact has almost certainly affected the results.

Other nations that were shown to be “risk” zones included Thailand, France and Cyprus.

The US, Greece and Portugal also made the list. 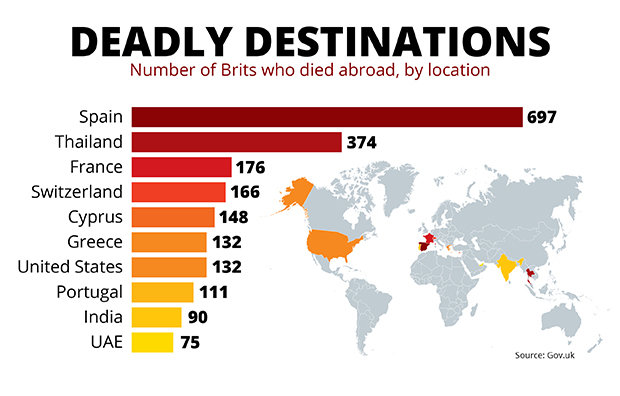 FINAL DESTINATION: These are the locations where there were the most deaths

Earlier this year, we revealed the countries where terrorists are “very likely” or “likely” to strike.

According to Foreign Office statistics, the US, France and Australia made the list due to a surge of jihadi activity.

Russia, Morocco and Turkey were among the other nations that were pinpointed.