The pound to euro exchange rate dropped from €1.13420 to €1.12749 yesterday after Boris Johnson announced his resignation.

Sterling has been going through a turbulent time since the referendum in June 2016.

But Brexit turmoil deepened as the Britain's Prime Minister Theresa May lost one of her most senior Cabinet members.

Today the exchange rate has recovered slightly but is still low at €1.13024 to the pound (at time of writing).

Foreign Secretary Boris Johnsons resignation seems to have impacted the pound in a negative way.

A statement from Downing Street said: "This afternoon, the Prime Minister accepted the resignation of Boris Johnson as Foreign Secretary.

"His replacement will be announced shortly. The Prime Minister thanks Boris for his work." 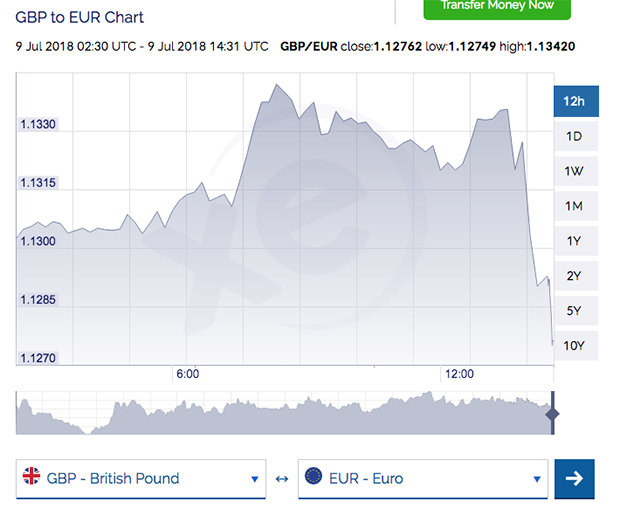 Johnson's decision to leave the government came hours after the minister in charge of Brexit negotiations, David Davis, also resigned.

The pound failed to improve against the euro after his resignation.

Mr Davis's official resignation letter read: "The national interest requires a Secretary of State in my department that is an enthusiastic believer in your approach, and not merely a reluctant conscript.

“While I have been grateful to you for the opportunity to serve, it is with great regret that I tender my resignation from the Cabinet with immediate effect.”

Theresa May responded: “I am sorry that the Government will not have the benefit of your continued expertise and counsel as we secure this deal and complete the process of leaving the EU, but I would like to thank you warmly for everything you have done over the past two years as Secretary of State to shape our departure from the EU, and the new role the UK will forge on the world stage as an independent, self-governing nation once again.”

On the two-year anniversary of the Brexit vote currency experts revealed the pound was down 12% against the euro – and it hasnt improved since.

This means youll now get £67 less holiday spending money if you change £500 today, compared with May 2016.

If you are travelling to Europe soon check out our top tips on getting the best exchange rate on your currency.

Is Sheridan Smith engaged? Rumours swirl that the actress is set to wed 28-year-old beau