‘Going back to Cold War and who has the bigger guns’: Analysts rip into US defense strategy

US Secretary of Defense Jim Mattis has revealed a National Defense Strategy (NDS) shifting the focus from international terrorism to America’s old geopolitical rivals, Russia and China. But should these really be its priorities?

Mattis unveiled the new NDS document on Friday, calling for a bigger defense budget to counter any “threat to America’s democracy experiment” in the world. But in the view of Jennifer Breedon, a lawyer specializing in foreign policy, international law and religious terrorism, abandoning the war on terror to go back to Cold War rivalries is a mistake.

“This shows a lack of understanding of the foreign structure that many people in the US government have, including General Mattis, and of what’s going on and the threats to the world,” Breedon told RT. “He’s saying basically that the war on terrorism is no longer a great concern in the United States… Not only should it be a concern for the United States, but most of our allies and countries around the world.”

Rather than spending money on rebuilding government institutions and fighting genocidal terrorism in countries like Syria and Iraq, Breedon said that it looked like the US government was only interested in brighter, shinier bombs.

“This goes back to the Cold War,” she added. “It was always ‘who has the bigger thing?’ Spending lots of money on things that aren’t even threats yet just to show that hey, we have a bigger and more powerful military than you guys do. Because that’s all it is: our gun is bigger than yours.”

According to political commentator and journalist John Wight, the United States has been trying to reassert its position of power over the world in the wake of the Soviet Union’s collapse.

“I don’t think anyone in Moscow or Beijing will be surprised,” Wight said. “The actions on the ground dictate that America’s been engaged in this kind of ramping-up of its strategic projection of military power since Donald Trump was elected in 2016. And I think this should disabuse anyone of any notion that the Trump presidency would mark any kind of change in US foreign policy.”

Wight said that Washington was responding to the weapons capabilities of Russia and China, which have seen significant developments in the past few years. But this, he said, misses the point. 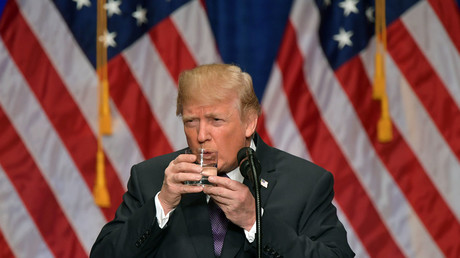 “Quantitative advantage in military terms does not necessarily translate into qualitative advantage, and we see this with the disastrous US military invasion of Iraq in 2003, where they were unable to pacify the country which everyone knows was part of their project for a new American century.

“The problem the Americans have is that they don’t get it. It’s not about being able to project military power; it’s about having public opinion on your side!”

“As a taxpayer, a concerned citizen and a numbers person, I look at the number $562 billion in spending – and that’s the public number, we don’t know how much additional money may be off the books – that is an enormous amount of money for a nation as small as ours in terms of people. We’re a quarter the size of China,” Ortel told RT.

“Given all the cost overruns I’ve seen in the past, I am uncomfortable just throwing more money into a black box here and I’d like to see some real accountability on what we spend. I mean, that’s after more money than the gross domestic product of, I think, all but 20 countries of the 200 on the planet.”

From lockdown to gridlock: Asias traffic resumes after fall in pollution